Why you aren't as smart as a chimpanzee called Ai

Ai and Dr Tetsuro Matsuzama have a long history spanning more than 20 years.

The history research on primates

Research on the great apes has proven to be beneficial - for humans. Contributions from nonhuman primates started with the ability to diagnose and treat typhoid fever in 1920s and since then our furry friends have aided in the development of; anesthesia, polio vaccines, cancer chemotherapy, lung transplants, anthrax vaccines, high blood pressure treatment, effects of second-hand smoke and much more. Despite these clear invaluable gains for mankind, ethical controvery surrounds medical research on the four great ape species (orangutans, gorillas, chimpanzees, bonobos) which has prompted severe restrictions in many countries on the use of great apes in medical research. In 1986 the United Kingdom announced a complete ban on the research with the British Home Secretary stating, "This is a of morality. The cognitive and behavioural characteristics and qualities of these animals mean it is unethical to treat them as expendable for research." In the year 2000 New Zealand eventually followed suit and banned great ape research completely In recent times more research is focusing on cognitive ability of apes with some surprising results. 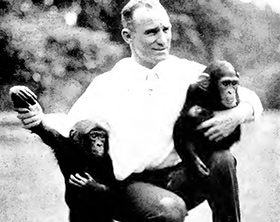 In 1916 Dr Robert Yerkes published an article recommending an established research center for the study of none human primates. In the 1916 New Haven journal Science, Yerkes stated "We have but fragementary knowledge and unsatifactory knowledge of the structure and development of most of the primates". After 15 years of Yerkes' persistant efforts the provision for a anthropoid research center was achieved. Yerkes purchased two bonobo primates called Chim and Panzee from a zoo. These two apes are considered the frist apes used in research.

In 1960 Jane Goodall began research in Tanzania, she overlooked strict scientific doctrine calling the chimpanzees by names such as Fifi, Flo, Frodo and Goliath instead of numbers and accepting their unique and individual personalities. She observed and documented all the human actions she saw the chimpanzees performing such as hugging, kissing, pats on the back and even tickling. Her research was best known for challenging the belief that only humans could use tools. While observing one chimpanzee feeding at a termite mound, she watched him repeatedly place stalks of grass into termite holes, then remove them from the hole covered with clinging termites, effectively "fishing" for termites. 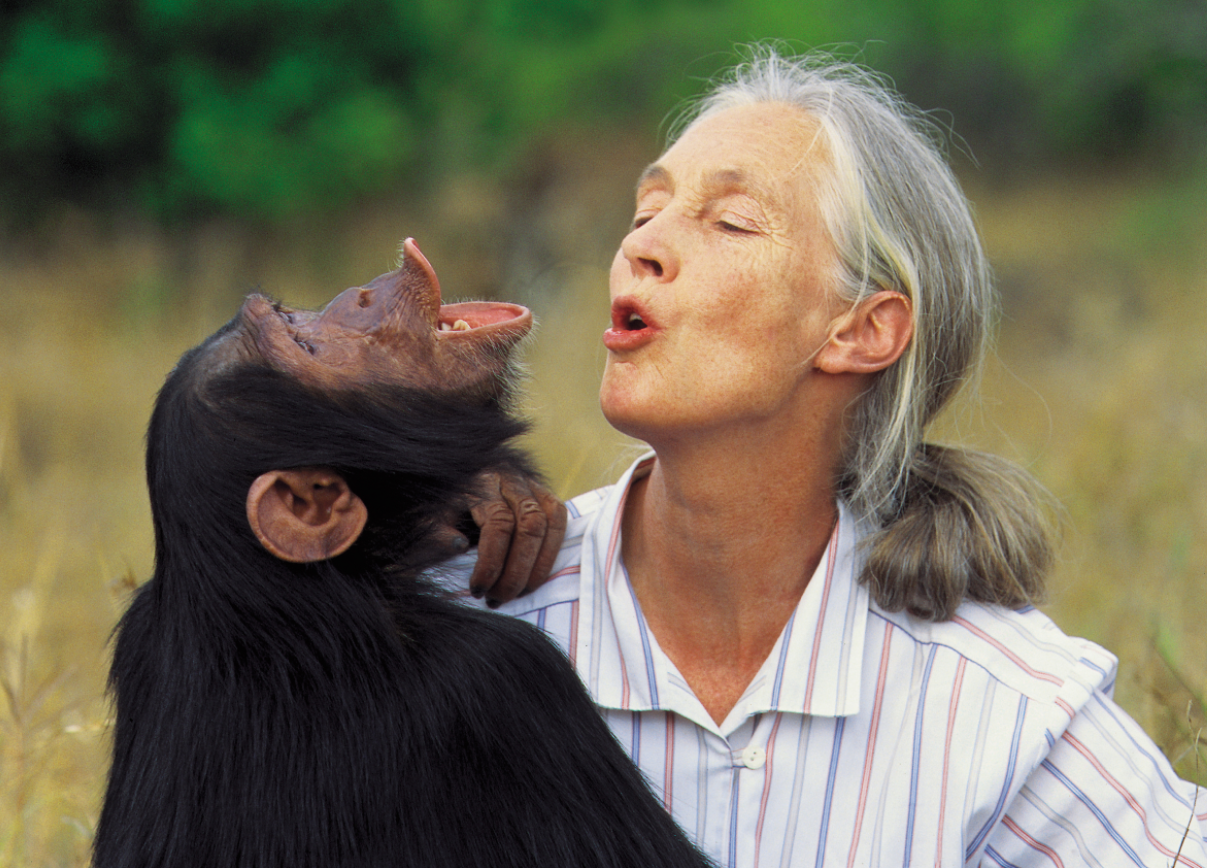 A breif history of language research on primates

Since the 1960s it has been known that the development of intelligence in apes can generally match that of a child up to the age of three. They can perform many cognitive tasks such as picture puzzles, block stacking, complex peg board and many others. These young apes can also imitate behaviours and actions such as pretending to steer a wheel or dial on a phone. However, despite this, it seems that for verbal language man has a clear superiority. But what price did we pay to have this ability?

In the late 1940s and early 50s Keith and Catherine Hayes, two researchers from Orange Park, Florida, USA adopted a chimpanzee called Viki. They raised Viki at their home as if she were a human baby. At the age of 14 months, the Hayeses were able to manipulate Viki's lips and she could produce the word 'mama'. Shortly she was able to softly speak the word 'mama' unaided. When Viki was two and a half she had learned to whisper the words 'papa' and 'cup'. Viki used these three words meaningfully. She would use 'mama' and 'papa' to call upon the two researchers and 'cup' when she wished for a drink. Sadly Viki's journey of learning the English language was cut short when she contacted viral meningitis at the age of 7. 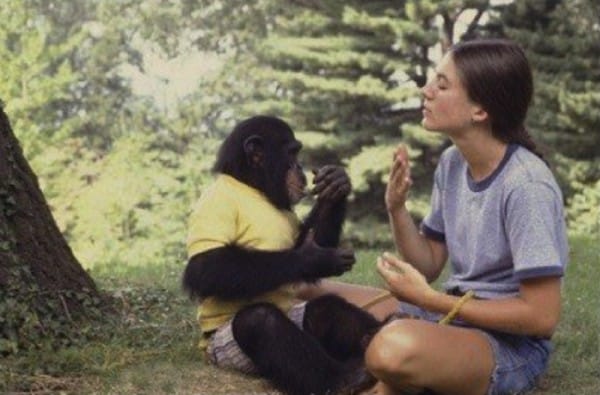 In the 1960s Allen and Beatrix Gardener at the University of Nevada regonised that chimpanzees gesture to one another a lot. They decided that these gestures warrented further investigation to assess whether a chimpanzee could learn human sign language. In 1966 they started working with a 1 year old female chimp from West Africa who Allen and Beatrix called Washoe. Her namesake was from after the second most populated county in Nevada where the Gardeners lived. Similarly to the Hayeses, the Gardeners raised Washoe as if she was a human baby. Often Washoe could be seen dressed in clothes, eating at the dinner table, doing chores and going out for family car rides. The researchers only ever signed American Sign Lanague to communicate Washoe to avoid her getting confused with vocal communcation. Washoe learned about 350 confirmed ASL gestures (confirmed being observed by an independent person who was blinded to the study). It is also claimed that upon seeing a swan Washoe signed the words 'water' and 'bird' which he later carer said that "was like getting an SOS from space".

In 1978 Koko the gorilla moved from San Francisco Zoo to Stanford University. Koko was able to sign more than 1,000 signs and able to combine them in very complex ways. Her instructor and caregiver, Francine Patterson reported that upon seeing a 'ring', Koko signed a combination of the words 'finger' and 'bracelet'. Koko's itelligence level was comparable to that of a human infant, scoring 70-90 on the Cattell Infant Intelligence Scale. Famously, upon being asked what Koko wished for Christmas 1983 Koko replied a cat. Initially Koko was given a stuffed toy but Koko expressed dislike to the toy, did not play with it and signed "sad". On her birthday in July 1984, Koko was able to pick a grey Manx cat from a litter and named him "All Ball". Koko was very gentle and loving with All Ball and even tried to nurse as if he was a baby gorilla. In December of 1984 All Ball escaped from Koko's cage and was killed by a car. Upon being told the news that ALl Ball had been killed, Koko signed "Bad, sad, bad, frown, cry, frown, sad". Patterson also reported Koko making human weeping sounds after the incident. 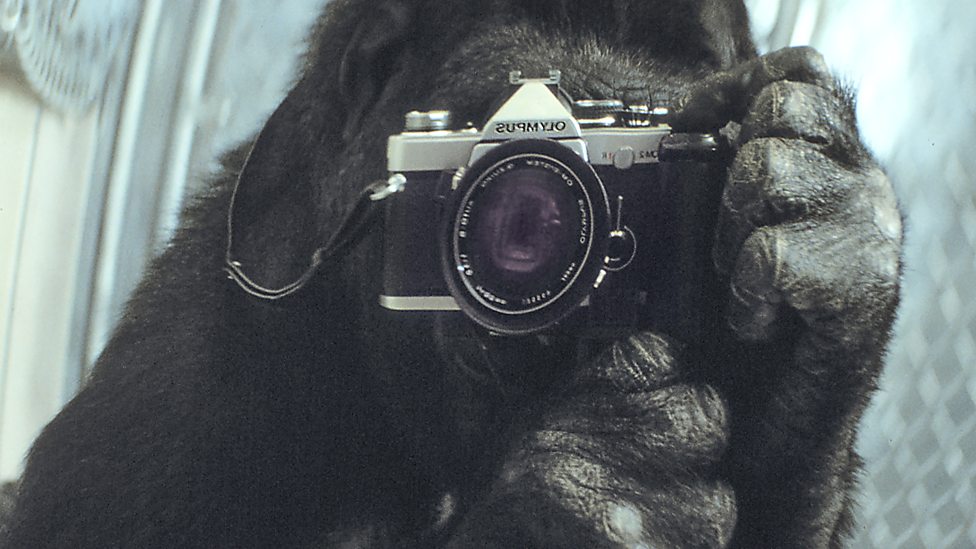 Where is the trade off?

In the first section of this article we breifly touched on how Dr Jane Goodall single handedly changed the general perception in the scientific community of the great apes capacity both emotionally and intellectually. This realization prompted research into the uncovering limits in language and other cognitive functions accessible to the great apes. In the second section we discussed how apes have a clear ability to not only understand words, but also more complex context and application of language. This brings us to the video below. A chimpanzee by the name of Ai (named after the Japanese word for love) from Inuyama, Japan. Ai can complete a test in which she presses in 9 boxes in numerical order after only seeing the numbers for 0.5 seconds. So, I'll leave you to test yourself against the Ai (I've included a human mode to make it more easier for you!). This article proves language and cognitive ability are both present and highly functional in chimpanzees. So, I'll leave you with this question: Where is the Cognitive Tradeoff?

Touch the grey square at the bottom left to begin the test!